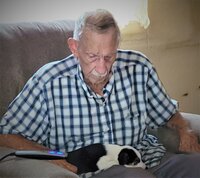 WEST WINFIELD – Mr. Richard “Dick” Bunce, age 85, husband of the late June Bunce, passed away just five months after his beloved wife on Monday evening, September 19, 2022, in the privacy and comfort of his home. Born on February 28, 1937 in Herkimer, Richard was the son of the late Claude and Myrtle (Hadcock) Bunce. He was raised and educated locally and attended West Winfield schools. On November 26, 1960, Richard was wed to the former June Walts and together they shared in a loving, blessed and devoted union of over sixty-one years, until June’s passing on April 27, 2022. A piece of Richard’s heart went with his wife that day and his family takes comfort in knowing that the two are now reunited in Heaven. Dick was a hardworking man who began running the family farm in the Town of Litchfield from a very early age. Throughout the years he held positions with Cittadino Quarries, Remington Arms, Kelsey-Hayes and with Mount Markham Schools as a bus driver. He could always be found driving his tractor or working on some project around his home. In his spare time, Dick enjoyed watching NASCAR and fishing. One of his favorite pastimes was playing cards and he had a knack for the game of pitch. He also proudly served his country as a member of the National Guard’s 105th Military Police Company in Utica. Dick is survived by his daughter, Kelly Bunce; his brothers, Fred Sterling, Curtis Bunce and his wife, Dorothy, and Ronald Bunce and his companion, Patty Hess; his sister, Sherri Rolchigo and her husband, Joe; and his former sister-in-law, Betty Bunce. He also leaves numerous nieces, nephews, cousins and in-laws. He was predeceased by his infant daughter, Tracie Jean; and his sisters and brothers-in-law, Helen and Mort Edwards, Sandy Combs and Shirley and Al Sanders. Friends and relatives are invited to attend calling hours for Dick on Thursday, September 29, 2022 from 5:00PM – 7:00PM at the Enea & Ciaccia Family Funeral Home, 4309 Acme Road, Town of Frankfort, Ilion, NY (315) 894-8000. Dick’s memorial service and Celebration of Life will commence at 7:00PM at the funeral home, immediately upon the conclusion of calling hours. Final interment will take place at Cedarville Cemetery on Friday, September 30, 2022, at 10:30AM, where Dick’s remains will be laid to rest with his wife, June. In lieu of flowers, please consider memorial contributions to the West Winfield Fire Department, PO Box 158, West Main Street, West Winfield, NY 13491. Envelopes will be available at the funeral home. The Bunce family has entrusted Dick’s final wishes to Harry and Kevin Enea and Martin L. Ciaccia, Funeral Directors. Online notes of sympathy may be left at www.eneafamily.com.