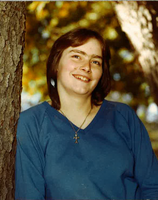 Mrs. Lena Marie O’Dell, age 59, passed away peacefully on Thursday afternoon, June 16, 2022, at the Foltsbrook Center in Herkimer. Born on April 17, 1963, Lena was the daughter of the late Clifford Vincent and Frankie Joan (Romagnolo) Olsen. She was raised in Loch Sheldrake, NY and was a graduate of Tri Valley Central Schools with the Class of 1983. In later years, she went on to receive her Associate’s Degree in Computer Programming from Herkimer County Community College. In 1989 Lena was married to Daniel L. O’Dell and together they spent thirty years of love and togetherness until Dan’s passing on September 21, 2019. Lena is survived by her children, Daniel L. O’Dell, II and Justine O’Dell, both of Ilion; by her siblings, Julie Freeman of Roanoke, VA, Joan and Bruce Tiger of Locke, NY, Clifford and Sally Olsen of Dolan Springs, Arizona, Charles Olsen and April Davis of Grahamsville, NY and Justine Rosa of Hallandale Beach, Florida. She also leaves her in-laws, Pauline Olsen of Monticello, NY, Shirley Gillette, Earl Gillette and Scott Gillette; along with numerous nieces, nephews, great-nieces, great-nephews and friends, with special mention of Krystina Stant, for being a constant source of support to the O’Dell family. The O’Dell family has entrusted the care of their beloved mother and sister to the Enea & Ciaccia Family Funeral Home, 4309 Acme Road, Town of Frankfort, Ilion, NY (315) 894-8000, Harry and Kevin Enea and Martin L. Ciaccia, Funeral Directors. Online notes of sympathy may be left at www.eneafamily.com.